If you use Google Chrome Dev Channel or a recent Chromium build, you can install 3 Google apps: Gmail, Google Calendar and Google Docs.

“An installed web app could be separated visually from other tabs, could integrate better with the OS, and could be granted increased permissions. Installing a web app in Google Chrome is easy and quick, with no restart required. At its simplest, installing a web app is like creating a super-bookmark to it,” explains Google. 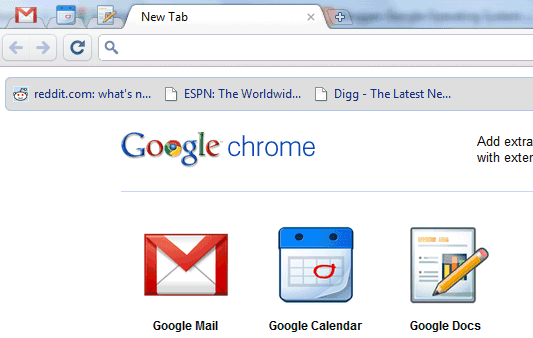 To install a web app, you need to write a small Chrome extension that includes one or more icons, the URLs used by the applications and the permissions that are required.

Chrome already includes extensions for 3 popular Google services and here’s how to add them:

1. Make sure you use Chrome Dev Channel 6 or a recent Chromium build.

2. Edit Chrome’s desktop shortcut and add a command-line flag. In Windows, right-click on the shortcut, select “Properties”, append a space followed by –enable-apps in the Target field and restart Chrome.

3. Open Chrome, go to chrome://extensions and click on “Developer mode”.

4. Click on “load unpacked extension” and navigate to Chrome’s resources folder. Here’s the location of the folder in Windows:

5. Click on one of three folders: gmail_app, calendar_app, docs_app and repeat the steps 4-5 for the other two folders.

Web apps are added to the new tab page, they use special pinned tabs that no longer include the Omnibox and the Gmail app has an option for desktop notifications, which doesn’t seem to be enabled.

“Once installed, a web app gets a big icon in Google Chrome’s app launcher area, as well as some integration with the host OS. When running, an installed web app has a special frame and other UI enhancements to make the web app easier to distinguish from other web content. This special treatment makes running apps easier to find and prevents accidentally opening multiple copies of them.”

Google will launch a Chrome Web Store for web apps, where you’ll be able to find an install other applications. Until then, you can create extensions for your favorite web apps.